This month we looked at law firms’ plans relative to profit improvement. Specifically, we asked law firm leaders which profit drivers they planned to use to improve profitability at their own firms over the next few years. We also asked each to share his/her expectations regarding profit growth in the next three years.

Starting with expectations, we were pleased to see a measured optimism coming from the overwhelming majority of law firms. Only about 11% of firms expect their annual profits to be flat or declining over the next three years. Conversely, roughly 60% expect profits to rise modestly (i.e., less than five percent) annually each of the next three years. None, however, expect robust profit growth of greater than 10% annually.

What strategies do firms expect to drive that measured profit growth? Two profit drivers were stood out as preferred strategies for the coming years – increased production (i.e., billable time) and improved realization. Meanwhile, increased leverage was far and away the least preferred profit improvement strategy – in fact a quarter of respondents consider increased leverage to be “not a viable driver for profit growth at our firm.” 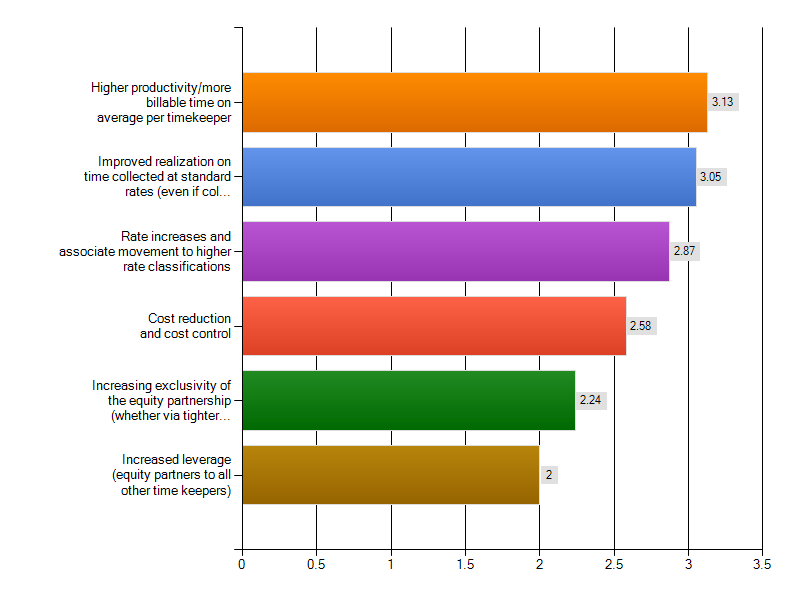 These findings represent a marked departure from profit growth strategies of the past two decades.

THE MOST OPTIMISTIC FIRMS HAVE A DIFFERENT STRATEGY

Looking at the most optimistic firms responding to the survey (i.e., those expecting profits to grow five to ten percent annually) – and comparing them to everyone else – reveals that those firms are pursuing a somewhat different strategy. Namely, the most optimistic firms plan to put a much greater emphasis on improving realization (they rate realization as a strategy more than 20% higher than their peers in other firms).

Since the questions made clear that alternative fee arrangements were one means for improving realization, AFAs could be an important part of the most optimistic firms’ strategy. More simply, the more optimistic firms may simply plan to discount less and/or write-off less time. The most optimistic firms were slightly less bullish on raising rates (compared to others), so those firms very well could be focused on charging (and collecting) standard rates.

Given these findings, however, we plan to take a closer look at AFAs in an upcoming “strategy question of the month.” Thanks for participating and for commenting below.

The average ratings regarding profit improvement strategies were based on a four point scale in which:

Our response rates continue to grow month to month (thanks again for that). We hope that continues to grow and we encourage you to share your experiences with your peers.